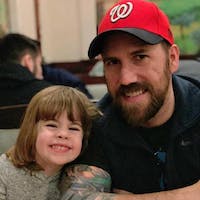 In my last post How to Automatically Generate Request Models from TypeScript Interfaces, I walked through how to automatically define request and response models for an AWS API Gateway (with CDK). There several benefits to this such as better endpoint security and you can export an OpenAPI / Swagger spec like this from either the AWS CLI or via the AWS API Gateway Console.

The problem with that is the only way to export the OpenAPI spec is AFTER deploying the API. There are plenty of reasons you may want to have the spec before deploying the API out into the wild (more security checks, client library generation, documentation, etc).

So, what did I do? I improved my code from my last post a bit and created a CDK Construct that creates a RestAPI with parameter, request and response models (with validations) and as it's defining them it uses the same information to generate an OpenAPI spec.

The code for this project lives here: github.com/martzcodes/blog-cdk-openapi and this is the result (left is AWS CLI generated api spec from deployed API, right is CDK code-generated spec before deploying) 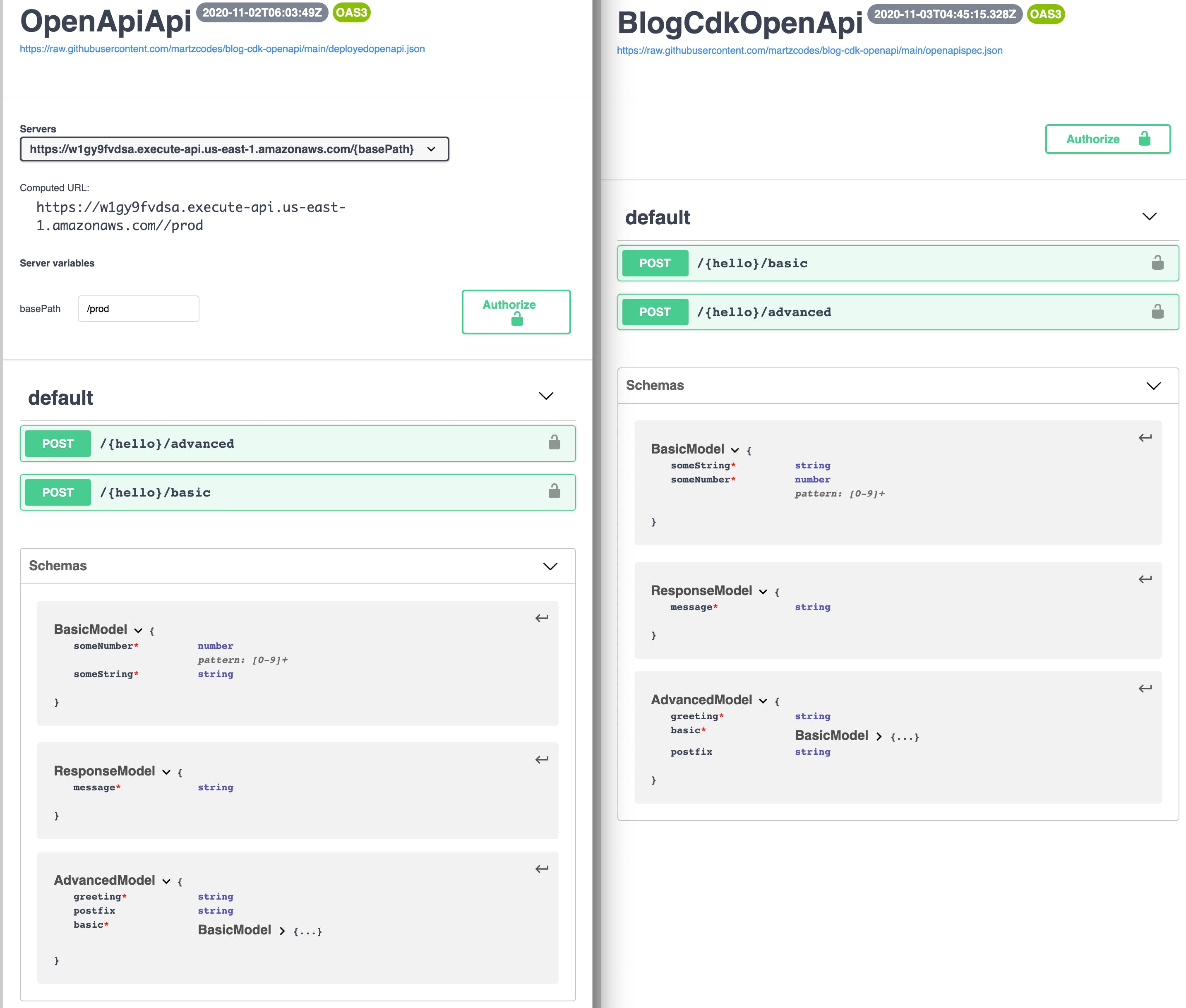 I made some improvement to the code I used for the last post... namely

With those improvements it was a simple matter of running aws apigateway get-export --parameters extensions='postman' --rest-api-id c638jrlvt0 --stage-name prod --export-type oas30 openapideployed.json to generate the openapi spec file to get my baseline. If you read through the file... there isn't a lot of API Gateway specific stuff in there... there's the server, which we don't really care about since our API isn't deployed at this point anyways, and the logical id of the authorizer function blogcdkopenapiblogAuthorizer0C135D8A which isn't really important... the key name just needs to match what references it above, and we're generating that anyways. Everything else is internal references within the file.

The rough mapping is this:

The API Gateway Module that generates the Rest API we'll be using is a bit annoying though. Unlike the HttpAPI in the v2 apigateway module... RestAPI defines endpoints via resource, like this:

Given that the OpenAPI spec uses full paths and IMO it feels cleaner, I'm going to write the construct in a way that allows you to add endpoints by route.

What did I end up with?

api.ts includes the CDK Construct. As an input it takes a path to a tsconfig.json file (used by the 3rd party TS -> JSON Schema library), the location to where the request/response models live, and the RestApiProps that go in the api constructor.

The constructor of the construct creates the RestApi and retrieves the JSON schemas, but doesn't do anything with them. It also initializes the OpenAPI spec:

Of these, addEndpoint is the most important... the rest are really more "internal"/private methods. Everything we need to do in our stack is effectively done with the addEndpoint method.

...shows what we did before using the last post's code (left side), with what we now need to do in the stack to create an endpoint (right side). So, the construct abstracts away a lot of that.

Behind the scenes, this method creates the resources for the path (if they don't already exist, creates a validator if it doesn't exist (if needed), adds the path with reference to the model, adds the model if it hasn't already been added to both the OpenAPI spec and to the RestAPI.

The last "trick" is just to save the generated api to disk so that it can be committed with the rest of the code... we can do that via a test pretty easily.

First, I added a prop to the stack for whether or not to generate the spec

Which is better viewed as: editor.swagger.io/?url=https://raw.githubus..

The world is your oyster!

I'm considering turning this into a library... what do you think?

And, if you'd like me to go deeper into any of my code or have suggestions for improvements.... let me know!

If you're interested in starting a dev blog... join hashnode and use my referral: hashnode.com/@martzcodes/joinme (I get some perks).